skip to main | skip to sidebar

The workers at his factory call him the Tiger.  He is proud they have chosen this name.  It shows they fear him.  It shows his methods work.

He prowls the factory floor with silent stealth, always taking his prey by surprise.  Workers trapped in the vicious claws of his gaze know it is finished for them.  He stands erect before his prey as they thrust themselves at his feet.  "I have a family, another child on the way." The most desperate always say this - a new baby - as if mention of a child should arouse pity in him.

He laughs, a wicked rumble of a laugh that he knows is the reason for his nickname.

"I sleep only four hours a night so I can keep this factory running," he says.  "And you have the audacity to feign tiredness in my presence."

He lets security do the real Tiger's work, to drag the workers away.  Some are limp and resigned, some scream and kick. All are defeated.  He serenades their exit with his savage laughter, making sure he is the one to bolt the factory door behind them.

These women and men whose livelihoods are destroyed - who, because they needed a moment's rest, must face the wrath of a jilted landlord, must hear their sleeping children moan in hunger - are left only with impotent power to curse the factory owner, invoking the demons and the saints to bring upon him misery and despair.

Unknown to them, their curses are fulfilled.  The Tiger, divorced and childless, lives alone.  His parents are dead.  He is despised by his peers.  His vices, prostitutes and whisky, augment his emptiness.

Most of all he hates the night-time.

In his dreams he is a boy.  His friends have caught a kitten.  With them, he ties a tin can to the kitten's tail.  In the tin can, they secure a firecracker, then light it as they place the kitten on the ground.

The kitten looks at the tin can, fascinated by the hissing noise it makes.  Then booming white light blinds the boy.  When the light fades he is no longer a boy, but the kitten, fleeing.  Terror pulses through his body. His friends are chasing him.  "Run 'til you die, pussy!" they shout, then stop at the side of the road, laughing and whooping.   He wants to stop too, to rest, but a dreadful noise chases him, the rattling that exploded earlier. He must run.

He spasms, collapsing in the road.  The tarmac is cold against his body.  He cannot sleep and he cannot move.  The ground rumbles, bringing with it a roaring, monstrous white light. He knows it is a car. He knows he must get off the road.  His body clenches.

In that moment he wakes.  When the terror subsides enough for him to move, he sits up and checks the clock. It's quarter to two.  Four hours he must lie awake now. Four hours until morning.
Posted by David Masters at 09:41 17 comments:

Benji slipped silently out of the bed.

She couldn't fault his attempt at stealth.  He hadn't lifted the duvet and let in the draught of cold night air that used to make her shiver.  He'd trodden carefully as he moved to the door, avoiding the creaking floorboard.

She listened for his next movements.  He was making his way down the stairs, slowly, gripping the banister to support his weight and lighten his step.

"Just sleep," she told herself.  "Sleep."  She stole back her share of the duvet, flipped her pillow to the cool side, and focused on the white stars she saw when she closed her eyes, as the doctor had taught her.

Her body tensed as she heard the water pipes rumble, a soft hiss, barely piercing the silence.  Had she imagined it?  She chewed on her lip as she listened to the darkness.

The kitchen door clicked shut.  He was coming back up.  She pretended to be sleeping.

He slid back into bed, shaping his body to match hers, cautiously wrapping an arm around her stomach.  His hand was cold, but she refused to flinch.  He mustn't know he'd woken her.

Within moments she felt his warm, slow, sleeping breath on the nape of her neck.  The tap downstairs dripped.  Hadn't it?

She shut her eyes again, watched the white stars, matched her breathing to Benji's.

She waited, minutes, to be sure she wouldn't wake him.  She slipped silently out of bed, down to the kitchen.

No light needed.  She watched the tap. No drip.  But, yes, he'd left his mess.  He'd left his water glass by the sink.  Left it for the morning.  He always did that.

She bit her lip again.  "Freak," she told herself.

As she filled the washing up bowl with hot bubbles, then placed her hands in the water to clean the glass, the tension in her body began to calm. Once she'd washed, dried, and put away the glass, emptied the bowl, and wiped the sink, she'd be able to sleep.

Back upstairs, Benji was still sleeping. She held him, trying to take the relaxed energy of his sleep into her own body.  Her eyes closed themselves.  She saw the stars.  The stars made shapes.  She was dreaming. Wasn't she? She opened her eyes to check.

(The old people I work with tell me all kinds of stories.  With Alf, when I mentioned I study philosophy, the conversation got round to the meaning of life.

"The only man I ever met who knew it was a homeless beggar," Alf said.

I saw him on my walk to school, standing on the street corner behind an empty table.  It was his eyes I noticed first. Icy blue, cold like the winter air.  He was staring blankly into space.  Billows of steamy breath puffed out from his nostrils.  His red knitted hat was fraying at the edges, his blue coat dirty and torn, a pocket falling off.  He shuffled from foot to foot to keep warm.

On my way home from school he was still there.

"What're you staring at?" Mother asked, then looked over to see the man.  "Come on," she said, trying to hurry me along. I stood there, transfixed.

"Alright, alright," Mother said.  "Here, give him this."  She opened her purse and handed me a thrupenny bit.

As the man saw me approach, his face broke out into a kindly smile.  "You're my first customer of the day," he said.  "What can I do you for?"

I held out the coin.  He shook his head.  "You couldn't buy nothing here with that," he said.

"What're you selling?" I asked, looking up and down the empty table.

He leaned forward.  "Here, I'll tell you a secret."  He looked around to check no-one was listening.  "I'm selling the meaning of life. To one patron only."

He looked at me expectantly, then he gave me a wink.

"To you young sir, two pounds."

Two pounds would take me weeks of pocket money.  I'd never managed to save that much.

But the meaning of life.  I'd asked Dad about it before.  "Tell me when you find out," he'd said, laughing.  Mother had scolded me and told me to focus on more important things.  "Like what?" I'd asked.  "Like school, your education," she'd replied.  So I took the question to school.  Mrs. Walker said I would get out of the habit of asking such awkward questions in a decade or so.  Then she had put "decade" into next week's spelling test because I'd asked what it meant.  It seemed to me grown-ups didn't much care about the meaning of life.  And yet here was a man offering it for sale.

As I stood there thinking, Mother came over and dragged me away.

"What took you so long?" she scolded.  "I told you not to talk with him, just to give him the coin."

"But he knows the meaning of life."

"Oh does he now?  Very good."  She said "very good" in the same way she did when Dad said he was going out to the pub.  She hated him going out, I could tell, but all she said was "very good".

The next day the man was gone.  I asked Mother why.

"The police must have asked him to move on.  They like to keep the town centre clean of beggars," she said.

I knew better.  They must've moved him on, yes.  But it wasn't because he was homeless.  It was because grown-ups couldn't cope with having someone in their midst who threatened, at any moment, to explain the meaning of life.
Posted by David Masters at 08:21 15 comments:

Anyone Can Draw a Saltpot 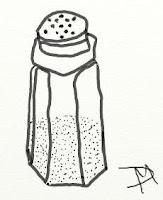 28th December 2009
Alan called me up yesterday. He invited me to L'Etoile, a swanky French place I've never been able to afford.  "Only if you're paying," I said.  He'd always been a rich bastard.

He was waiting for me when I arrived. "I'm Alain now," he said. I asked him to spell it.  The waiter showed us to our table.  Alain explained the menu to me and chose the wine.

With old friends, school friends especially, you always talk about the past. Then about girls.  Occasionally the conversation turns to what you're up to now.

Alain's an artist. A world-travelling artist.  Has been for two years.  "You should show me your paintings sometime," I said. I was half-serious.

He looked confused. Offended. His tone was patronising.  "I haven't painted anything yet," he said.

"I haven't found anyone worthy of my effort to study and paint them," he said. "No one I have seen on this earth is beautiful or flawless enough."


2nd January 2010
Met Wes today at Harry's Tea Chest.  He was already there when I turned up.  "Coffee please," he said when I arrived. "Eight sugars." Some people never change.

Turns out he's an artist too.

As I sat down with my coffee - sugar free - and handed him his dentist's nightmare, he grabbed the salt pot from the side of the table and thumped it down in front of me.

"Draw it," he said. He took a biro and a sketch pad from his bag, and placed them next to the salt pot.

He laughed. "Anyone can draw a salt pot."

I opened his notebook. Inside was page upon page of scribbled portraits. Before the last blank page was a sketch of me queuing to buy the coffees.  The portraits were profoundly simple. They were all scrawled line drawings, yet in every portrait you could see something of the soul of the person being drawn.

Everyone Wes had drawn, he'd asked to draw a salt pot next to their portrait.  I had to admit, all the drawings were alright. And all of them were as unique as the person who'd drawn them.

As I contemplated the outline of the salt pot, Wes explained his philosophy, the philosophy of his notebook.

"I draw everyone," he said.  "Every café I visit, I buy a coffee and I draw someone."

"There's always someone to draw.  Even if it's the bored waitress.  Everywhere I look, in everyone's face, there's art happening."

"Even the ugly bastards?"

"Especially the ugly bastards," he said. "They're the most beautiful."
Posted by David Masters at 08:01 25 comments: